I am the first up in the house on weekday mornings. It took me a while to realize it, but I actually like that half hour or so before anyone else is awake. I’m on auto-pilot to some degree–working out what to pull together for lunches, and what to whip up for breakfast. Still, it’s my time in the house, and I enjoy those moments of quiet and calm.

On winter mornings, more often than not breakfast includes a warm beverage. Sometimes it’s just a simple pot of tea, or maybe some Mexican-style hot cocoa. But if I have a few extra moments (or if it’s one of those extra gray winter mornings), I will 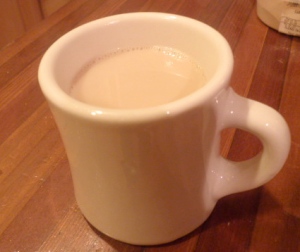 brew up some masala chai. Honestly, I have no idea how “authentic” my version is, but as far as anyone in my house is concerned, this is the way masala chai is supposed to taste.

It’s pretty much a draw for Josh which hot beverage he prefers–the Mexican hot cocoa or masala chai. For me, hands down I’ll take the masala chai.

Place all ingredients into a saucepan and heat over a medium flame. Once you start to see steam rising from the pot, lower to a simmer. This is definitely  a place to play with spices–I avoid ginger, for example, based on my kids’ preference. It’s important, though, that the cardamon dominates in your ratios. I also think it’s important to use cinnamon sticks instead of ground cinnamon. There’s a more full, rounded taste in the sticks, in my opinion.

I’ve never bothered timing out how long I leave the masala chai on simmer. I just go about fixing breakfast and making lunches, then pour the tea last. I would say at a minimum let it simmer for 10-15 minutes.

The kids like a smooth tea, so I always take the extra step of straining the mixture through a fine mesh filter before serving (such as a reusable coffee filter).

Boy, writing this up sure made me thirsty. And it is looking rather gray out there this morning….

This entry was posted in Uncategorized and tagged beverages, breakfast, Indian, winter. Bookmark the permalink.