OK confession #1: this recipe has been sitting in my draft folder for weeks, and with my holiday lag is writing, I am only now getting back to it. But does that mean it is too late for me to share this pumpkin pie variation, what with the holiday season long gone?

Not in the least. 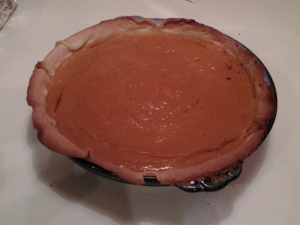 You see, I have a deep and abiding respect for pie. Just ask my family–for years, I have insisted on a birthday pie in place of cake. Not too many nights ago, I spent the better part of an hour driving around our metro area in search of something resembling a pie shop (we failed, I am sorry to say). And pie for breakfast? No problem.

In my reckoning, pumpkin pie is the orange-headed stepchild of the pie world. Honestly, it’s not my favorite pie, but certainly it is worthy of a place at the table beyond those six weeks between Thanksgiving and Christmas. Yes, I know–pumpkin is a late fall/winter squash, so of course pumpkin pie is going to make the rounds in November and December. But given the shelf life of a winter squash, I say there’s plenty of January and February out there that could use a little pie to cheer it up.

The only problem is: if you are going to try to avoid the canned puree, finding a sugar pie pumpkin beyond the holiday horizon may be a little tough. But then again, there’s no rule or law that says you have to use pumpkins to make pumpkin pie. Come to think of it, there probably is a law to that effect somewhere, but never mind that. What we’re really after here is a squash pie.

I am fortunate enough to have a farmer’s market with a wide variety of squashes throughout fall and winter. Butternut squash would be an easy to find and easy to use substitute, which had been my plan, but then I came across these little, squat things called Golden Nuggets. They look like mini-pumpkins, inside and out, and as it turns out, they have a creamy, sweet flesh that works wonderfully in a pie.

Pumpkin pie is basically a custard with pumpkin added. If you can make a custard, you can certainly make a pumpkin pie. That said, my proportions may look a bit off here, but here it is:

Halve, clean, and bake the squash until soft (see this butternut pecan soup recipe for more on this technique). Let cool, then scoop out the flesh. Puree in a blender or food processor and set aside.

Combine the rest of the ingredients except for the eggs in a sauce pan. Heat over a low flame. This is one of the few dishes where I actually use a thermometer. When the milk has heated to about 110 degrees, start to temper the beaten eggs, adding a tablespoon at a time of the hot milk. Continue this process until you have introduced about 1/3 of the total liquid. You can now add the egg and milk mixture back into the sauce pan and continue to heat.

Stirring constantly, watch your temperature and let the mixture rise to just under 140 degrees. Your custard will not have set at this temperature, but the mixture will start to thicken considerably and get a satiny texture. Remove from the heat and add the squash puree, mixing thoroughly.

Now add the mixture to a pie shell and bake at 400 degrees. Check to see if your pie has set after 25 minutes, and continue checking every five minutes until cooked through. You want a firm custard texture that will hold up when sliced, but you want to avoid overcooking.

Confession #2: You probably noticed that there’s no pie shell recipe, huh. Truth be told–I’ve never made my own pie crust. Maybe I will by the end of this year, but for the time being I use the refrigerator-section version of prepared pie crusts (the one you roll out into your own pie pan).

The Golden Nugget pie came out quite nicely, I thought, and Josh and I agreed that it was a perfectly appropriate breakfast food.

This entry was posted in Uncategorized and tagged dessert, experiments, fall, squash, winter. Bookmark the permalink.