Yet another recipe disclaimer: I have no idea if what I am presenting here is in fact a Senegalese dish. Why, then, call it Senegalese chick peas?

The blame/credit goes to Marie-Claude 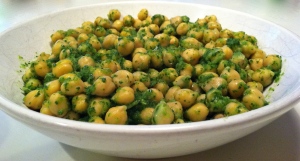 Mendy, chef at Boston’s Teranga and two-time finalist (and one-time champion) on Food Network’s Chopped. On the episode in which she won (“Thyme Flies”) Mendy presented an appetizer dish of Korean-style short ribs marinaded in her “secret ingredient”: a puree of bell pepper, scallions, garlic, parsley, and cilantro. According to Mendy, this marinade is used in all kinds of Senegalese dishes and is the taste of her childhood and home.

Boy did that sound good to me–a Senegalese chimichurri!

Mendy doesn’t give the ratios for this marinade, so I just winged it:

Place all of your ingredients, and about a 1/4 cup olive oil into a blender. Puree, drizzling in additional olive oil until you have a pesto-like texture. And that’s it!

For the actual chickpea dish, it’s as simple as this:

Heat your oil in a frying pan and add your cooked chick peas (if you are using canned chick peas, make sure you drain and rinse thoroughly). Toss the chick peas in the olive oil for a few minutes on medium, then lower your heat and add the Senegalese marinade. Simmer for about five minutes, then serve with rice.

This dish does require another truth-in-advertising disclosure. It is not a Josh-friendly dish. In fact, it’s probably one of his least favorite. His little sister, though, absolutely adores it and will eat piles of these bright and tasty garbanzos. Hey, every once in a while I have to cook someone else’s  favorite dish too, right?

This entry was posted in Uncategorized and tagged African, beans, marinades, quick, side dishes, simple, vegetarian. Bookmark the permalink.