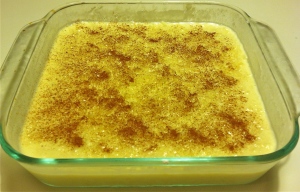 OK, so what do you do with that leftover rice from the Chinese restaurant?

Once again, our fridge is home to an orphaned pint of steamed rice, its tasty main course counterpart devoured and long gone. More often than I’d care to admit, that rice usually ends up plopping out of its box and into the trash can, a hard, white brick of inedible rock. Ah, the power of starch! What was once fluffy goodness soon crystallizes into a substance that falls somewhere between feldspar and quartz on the mineral hardness scale.

But all that starch really needs is a combination of liquid and heat to coax those crystals out of their bonds and into a more tasty molecular arrangement. And what better way to do that, and keep from wasting all that rice, than to make a pudding?

In a small bowl, beat the eggs and add the sugar. Continue to whip the egg and sugar mixture until the color and texture start to lighten.

OK, so now it’s time to make a custard. Heat the milk to around 110-120 degrees. Temper the egg-and-sugar mixture until you have added about 1/3 of your heated milk. Add the tempered egg mixture back into the heated milk, stirring continuously. Now add the rice, vanilla and cinnamon sticks.

Continue to heat the soon-to-be pudding over a low heat, stirring constantly and watching the temperature. When the custard has just about set, it will coat and adhere to your spoon–at about 150-160 degrees. Remove the cinnamon sticks.

Remove from the heat and transfer to a 9″x9″ glass pan. Garnish with additional ground cinnamon, if you desire.

What to do next is up to you. If you can let the pudding cool, it will set more completely. Then again, we always heat up our rice pudding when we serve it, so more often than not we will sneak a little taste (or three) before it even makes it to the pan.

This entry was posted in Uncategorized and tagged comfort food, dessert, leftovers, rice. Bookmark the permalink.