Josh and His Dad Experiment: Mustard

I was listening to The Splendid Table 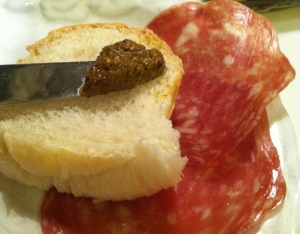 last week–yes, I am an NPR food geek, so much so that I have even called into the show (you want to hear me talk about tripe with Lynne Rosetto Kasper?) Anyway, Noelle Carter was on, talking about preparing homemade mustard, and I thought I would give it a try. As I have explained before, I have a major spice surplus problem in my household. I don’t have a lot of call for brown mustard seeds, and this experiment seemed like a good idea for using them up.

Noelle Carter’s straightforward approach involves soaking the mustard seeds for 24-36 hours in some liquid, both to activate the seeds and to aid in the grinding. I had learned an Indian technique for preparing mustard seeds that involved dry roasting them in a pan until they literally start to pop like kernels of corn. I figured this would be a nice way to both mature the flavor of the seeds and speed up the soak time.

Josh and I thought about what kinds of food we would like to use this mustard on and decided that we should make something to go with grilled bratwurst or grilled sausages. Thinking about sesame seed rolls and sausage-friendly spices led us to the following combination.

Place the mustard, sesame, cumin, and fennel seeds in a hot, dry frying pan. Allow the seeds to roast until they start to pop open and color. Lower the heat if the seeds start 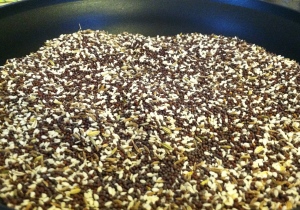 to smoke. Transfer the seeds to a glass bowl, and add the salt and 3/4 cup water. Let the seeds stand for around two hours.

Transfer the seeds to a blender or a food mill and add an additional 3/4 cup water. Begin grinding the seeds, adding additional water as needed. Noelle Carter says that water yields a more pungent product, but you could certainly swap out liquids here–vinegar or wine, for instance. Your finished product should be relatively smooth with a coarse texture. If you want something more golden than brown, add in the tumeric to your liking.

Transfer to a sealed container and store for several days to allow the flavors to merge and mellow–Noelle Carter recommends a week.

The finished product passed the taste test, though we are still waiting for it to age thoroughly. If we were to do it again, I might consider adding the seeds to roast in the following order: mustard seed, cumin seed, fennel seed, and sesame seed, based on how long each seed needs to roast. I would also probably add a little acid to the liquid–maybe lemon or lime juice?

So I’ve taken care of my mustard seed problem, but now we have a heck of a lot of mustard kicking around the house. I am thinking this stuff might work well as a marinade for a pork loin. We will keep you posted!

This entry was posted in Uncategorized and tagged condiments, experiments, marinades. Bookmark the permalink.

2 Responses to Josh and His Dad Experiment: Mustard